How many wolves are on campus at NC State?

We’re searching for all of the elusive, little known wolf statues. During a campus-wide contest in November 2017, students and fans located 20 wolf sculptures on campus. We know there are more out there, peering from academic building lobbies or poised in campus gathering areas.

If you spot another sculpture or any interesting, artsy wolves on campus, send a photo to PackFanSpirit@ncsu.edu. 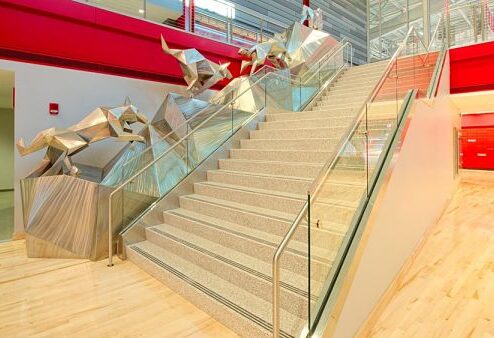 In Reynolds Coliseum’s Walk of Fame, four geometric stainless steel wolves race up a mountain to charge into the arena. Designed by Kansas City artist Beth Nybeck, the “Daring Victory” sculpture spans 50’ long and is 20’ tall at its peak. 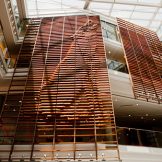 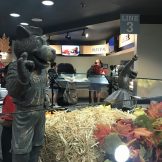 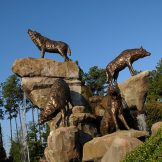 Former Wolfpack player and master sculptor Dick Idol created the “Wolfpack Turf” monument, which rises from the plaza in front of the Murphy Center at Carter-Finley Stadium. The statue is made up of six wolves, each two-times life size, standing on a 21-foot stone mountain. Each wolf is named for one of the characteristics of a wolf and of a Wolfpack football player: Confidence, Passion, Spirit, Courage, Pride and Strength. 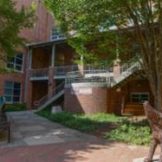 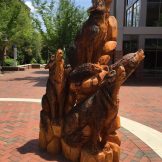 One of the “Heritage Trees” from the “Oak Circle” at Wolf Village is preserved as the “Spirit of the Wolfpack.” After the tree was damaged by root disease, University Housing secured local chainsaw artist Jerry Reid, who worked with artist Randy Boni, to repurpose the wood into something meaningful. 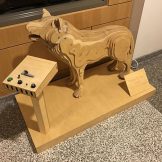 This is truly a homegrown wolf! Designed by mechanical engineering students Michelle Phillips and Kevin Young, the wooden Timber-Wolf has movable parts and was inspired by Phillips’ interest in amusement parks. You’ll find this wolf on the 3rd floor of Engineering Building III. 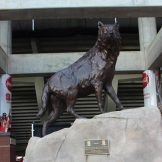 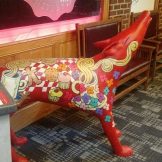 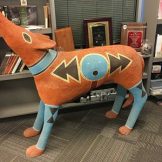 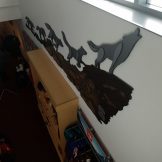 These wolves are on the run in Wolfpack Outfitters. 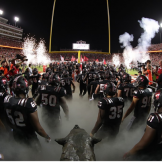 The wolf “Fury” inspires the Wolfpack as they exit the tunnel at Carter-Finley Stadium. 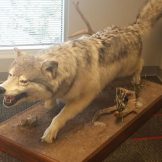 This stuffed wolf lurks at the Wolfpack Club. 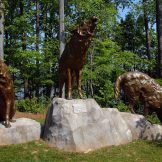 Wolves behind the Park Alumni Center on Centennial Campus. 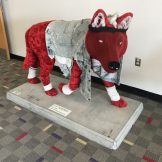 Look for this “RAD” wolf in the atrium of the College of Textiles. It was created by the Anni Albers Scholars in 2001. 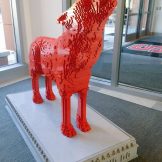 Not sure who created this popular Lego Wolf in the Talley Student Union. If you have the scoop, please let us know at trademarks@ncsu.edu. 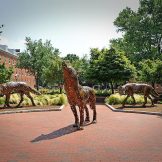 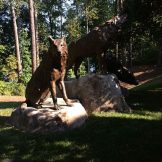 A pair of wolves, the “Passion Wolves of the Pack,” welcomes visitors to the Dorothy and Roy Park Alumni Center on Centennial Campus. 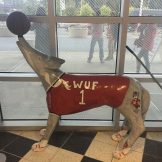 Ready for tip off, this #1 Wuf has the moves near the VIP entrance at PNC Arena, home of Wolfpack Men’s Basketball. 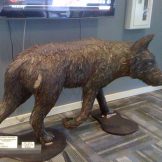 Inside the lobby of Wolf Village, find this wolf sculpted by Jim Gallucci of Greensboro as part of the Raleigh Red Wolf Ramble project in 2001-02. 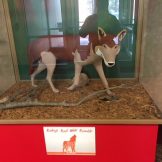 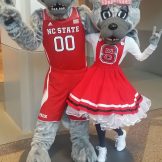 Mr. Wuf and Ms. Wuf hang out for fan photos at Reynolds Coliseum. 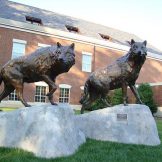 A pack surrounds the Park Alumni Center. These two alert wolves are known as “The Guardians.” 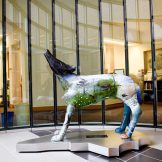 You’ll find this painted wolf sculpture in the lobby of the College of Natural Resources.